Summer is quickly coming to an end.  Before it does, I want to share some pictures of our recent family vacation and a few tips for anyone headed to Southern California; specifically to Disneyland.  If you follow me on Instagram you’ve probably already seen some of these pictures.

Every Summer we try to take a family vacation and look for places where children are welcome and we don’t have to worry about getting rained on since we have little ones. Playing in the rain can be fun, but when you have young children and are far away from home without all your rain gear, it kinda takes the fun out of enjoying a winter vacation.  So, until our children can help us pack and carry their own luggage, we’re sticking to Summer vacations (for now).  This year we headed to Pismo Beach and Disneyland.

So far my husband and I have stayed in two beautiful beach resorts as a couple.  The first was for our honeymoon in Nuevo Vallarta Mexico, and the other in Oahu Hawaii.  This being our third time staying oceanside could have very well been rated as our first experience.  While the first two experiences were as wonderful as anyone would expect them to be, Pismo Beach surprisingly made it to the top of our “favorites” list.
You know that feeling you get when you experience something for the first time and it makes you happier than you thought you could feel in that time and place?  Well that’s kindof how we felt.  We knew where we were going, what to expect, how long we would stay, and sort of discussed a verbal itinerary on the way up about the things we wanted to do, but as soon as we got there, peace was the first to welcome us, and none of that itinerary mattered anymore. My husband and I took more deep breaths of air than on any normal given day to soak it all in.  I wondered if maybe all the stars were aligned for us by “someone” above who loves us and knew what we needed because we immediately felt blessed.
I know that probably sounds cheesy and corny, but it’s the truth! It’s the only way I can explain how happy and relaxed we felt the second we checked into our hotel.

Needless to say, we REALLY welcomed and enjoyed what Pismo Beach had to offer us.  Especially the view! The ocean view from the balcony was amazing!
Looking out to sea I couldn’t help feeling so small and insignificant compared to what looked like an endless sea.  It’s practically another world out there. That’s the only time feeling small is a good thing, which I love about being in front of an ocean by the way.  Feeling small.  It puts a lot of things into perspective for me.  Like the fact that life on Earth isn’t just about humans living, but also about the life that surrounds us. Life is all around us and to enjoy it we have to  s l o w w w  d o w n n n, turn off the tv, put the phone away and go outside before you miss what life on this planet has to offer.  Like the dolphins, sea otters, and whale tales we spotted in the horizon; or the helpless little crabs we found wandering the rim of the shore, dodging the giant human feet passing by; or in my case soaking in as many memories of my growing babies as I possibly could.

We made sandcastles, gathered seashells, took naps, walked along the shore to the pier. My husband swam in the ocean for the first time in more than a decade.
It was exactly what we needed before heading back into a large busy city like Los Angeles.

My husband coincidentally came across an article in our local newspaper which mentioned Olvera Street as the oldest street in Los Angeles.  So naturally we had to make a quick pit stop here. Not much was going on when we arrived but we didn’t need much to entertain us because there were plenty of vendors selling the kind of stuff you would find in Mexico, which we love.  We were actually glad that it wasn’t crowded. It allowed us to stay in that chillaxin’ mood that we brought with us from Pismo Beach.

Upon stepping foot into this historic and colorful alleyway, I was taken aback by all the beautiful pottery, clothing, home decor, and the FOOD!  I was surprised there were plenty of options for being such a small street.

We did a quick walk-through because shopping outdoors in 90 degree weather with a toddler surrounded by lots of breakables probably wasn’t the best idea, but we made the best of it and tried to shop as quickly as we could. I’m already looking forward to our next visit. If you’ve never been to Olvera Street and one day find yourself on this side of town, it’s worth a visit. Even if it is a quick one ;).

Oh and by the way, China Town is only about two blocks away!

For more information and history on Olvera Street click here.

Last summer we visited Disneyland and as usual had a blast (FYI we are huge Disney fans), but what we did not know wast California Adventure was undergoing some serious renovation at that time.  We had no idea.  So when we entered the California Adventure park after spending the first day in Disneyland, we were surprised and a bit disappointed that the entire front entrance was closed off as well as a good portion of the main street that leads to all the main attractions.  It was like a maze trying to get to all the rides.  Once we were in, everything was all good.

We started paying closer attention to the paintings on the temporary walls we were passing as we navigated ourselves through the maze.  Once we discovered Cars Land was being built, we were like, “What? Noooooo!?!?!  Really??  YESSSSSS!!!”  When it finally hit us what was going on behind these walls, my husband and I knew we would be back the following year.

And so here we are, in Disney’s California Adventure, cruisin’ down “Route 66”, meeting Lightning McQueen and his best friend Mater.

Disney engineers and developers have outdone themselves again (as expected) with this live replica of Cars Land.  It really is cool to see.  Everything is there!  Just the way it should be.  From the moment you arrive at the beginning of the street you really do feel like you’ve stepped into the movie itself, only without the cartoon effects of course.  At the end of the street, Stanley the founder of Radiator Springs is there to greet you just before stepping on over to the main attraction, Radiator Springs Racers!

But before I continue, I have to share a little bit of important information with you about this ride.

It’s popular, packed, a long 2-hour wait, but super fun.  Yup I said 2-hour wait!  Crazy right?!  But don’t worry, I have some tips for you on how to avoid the two hour wait in line.   GET A FAST PASS!  In order to get a fast pass for this ride you HAVE TO be in the Fast Pass line no later than 8am.  Get there by 8:30 and you are pushing your luck to enshuring you get one.  The line to get a Fast Pass goes by pretty quick too so don’t get discouraged if you get there and it wraps around half a disney block (cause it most likely will).

The first day we made it to the Fast Pass line by 9am we were lucky to get one because they are usually done anywhere between 8:45 and 9:00. That’s what one of the line attendants there told me. So, the next day I got up earlier and left the family sleeping in the hotel room to go get our Fast Passes.  What a disaster that turned out to be.  Here’s why:

(A) You can’t get a Fast Pass if you’re park tickets aren’t activated for that day.  That never occured to me so when I heard a line attendant anouncing this, I nearly cried because I only activated mine when I entered the park.  By this time I had been in line for about 20 minutes and was real close to the Fast Pass ticket booths. Needless to say I ended up with one Fast Pass for three people.  Not good.

(B) You can’t activate anyone else’s park tickets if they are not with you.  I asked on the way out, hoping I could just activate another one and go jump back in line and pray I get another Fast Pass.  Nope.  No can do because…

(C) If you activate your card and leave the park, you need a hand stamp with your card to re-enter.  If I would have activated another card, that would mean my husband or daughter would have to have a stamp on their hands to enter the park, but they were still in the hotel sleeping.  So I gave up and went back to the hotel.

I suppose we could have lied and said that our hand stamps were washed off after washing our hands, but I don’t like lying.  It’s not nice.  So get up early and GET A FAST PASS.  The ride is worth getting up earlier for more than it is waiting in line for 2 long and boring hours.  The good thing is if you are traveling with children who cannot get on any of the rides (like my 18-month-old), and miss out on getting a Fast Pass (which happened to us on the third day), you can get what they call a swap card for parents.

All that means is that you get a pass for the other parent who stays behind to watch their young child (after the other parent has waited in the regular line).  This allows them to enter through the Fast Pass line instead of having to wait in the long line all over again.  Just make sure the parent who gets on the ride first asks for the PARENT SWAP CARD.  They may even ask to see the child.

We also downloaded three apps on our iphone’s.  One that stood out and we used the most was theWalkeeWait app.  You’ll get wait times for all the rides in both parks for free.  If you want to upgrade for more information on the park such as restaurants, menus, prices, showtimes and such, the cost as of September 2012 is $4.99.

**Disclaimer: Please note that I am not asking you to purchase anything.  Nor am I advertising under a paid agreement by any company related to Disneyland parks or itunes.  I just wanted to share my experience at Disneyland with the hope of helping other families to have a smooth and stress free vacation.**
I hope you enjoyed reading about our shenanigans and minor misadventures we encountered on our trip and that you benefit from some of these tips.  Family vacations are a great way to bring your family together to reconnect.  Anytime you’re headed for a busy destination, remember to do some research beforehand to get a jump start.  You’ll be saving yourself some valuable time. 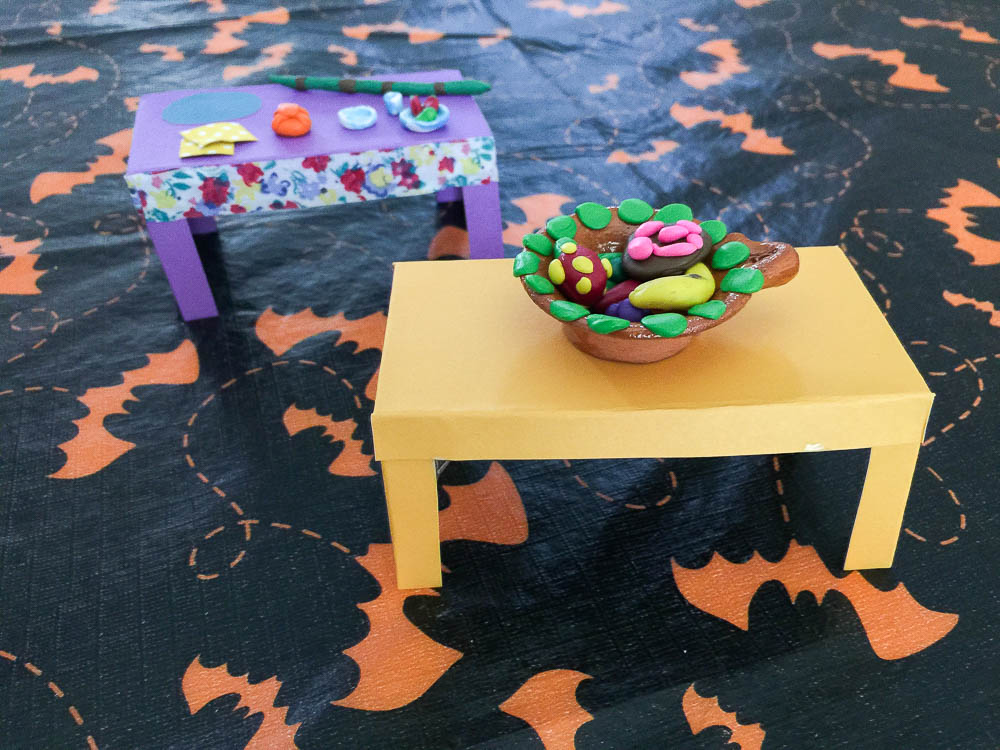 How To Make A Miniature Paper Table (Video)